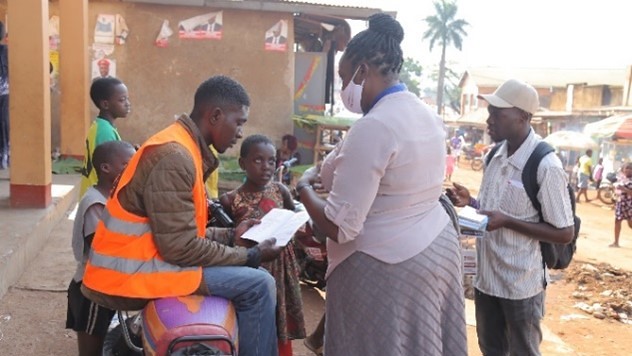 The Mombasa West Mission in Kenya is the first one to be conducted in the year 2021. The mission is scheduled for 1st to 11th July. The mobilization of missioners and preservation facilitators took place in the month of May. The AEE Kenya team intends to host 300 visiting missioners in 9 zones. The rest of the missioners will come from within Mombasa. This month, there has been a series of continued mobilization and trainings.

The Kayonza Mission in Rwanda was scheduled for 20th – 27th June but following the Volcanic eruption in the neighboring DRC, the mission was postponed to 15th – 22nd August. Preparations for the same are ongoing. At least 127 homes are targeted to be trained to conduct Home Based Evangelism (HBE). Though this is an ongoing activity, 42 households were reached in May this year using HBE and 9 people accepted to follow Christ.

In the Democratic Republic of Congo (DRC), preparations for the Mont-Amba Mission, which is set for 16th to 24th October, are ongoing. Mont-Amba is located South East Kinshasa in DRC. AE DRC Team conducted School of evangelism in the targeted location of the Matete, Ngaba, Kisenso and Lemba districts and a total of 276 participants from 99 local churches were trained. Currently, the team is mobilizing for prayer and funds for the mission. Earlier, 19 different local churches were equipped for further church members’ mobilization in the target area.

AEE Tanzania is set to have its mission between 22nd and 29th August in the capital city, Dar es Salaam. The team has been meeting the Pastors, equipping them through trainings towards the mission and conducting prayer for the 2021 Mission. Mobilization of evangelists and partners to participate in Dar Back-to-God Mission has as well been ongoing. In the month of May, a group of intercessors from different Churches gathered to purposely pray for the mission preparation and all programs at AEE-Tanzania.

In September, AE Uganda will have a mission in Jinja from 19th to 26th. The AE Team conducted a Vision Casting seminar for the mission where 52 leaders from Jinja City attended. This meeting brought together both the Anglican church leaders and Pentecostal church leaders in one house for the same purpose bridging the gap and dealing with misunderstandings that have always been there. Mobilization teams have been established and tasked to draft their strategies to aid achieving the mission targets. An overall steering committee with 18 members was constituted in May to help oversee the preparations. AE Uganda facilitated a training held in Entebbe for 120 evangelists by our partners in ministry who are planning a citywide mission in that city. The training was organized by the Joint Pastors Network in Entebbe city.

AE Southern Africa Region (AESAR) which is comprised of the Malawi, Zambia and Zimbabwe teams is set to hold a mission from 19th – 25th September in Zomba, Malawi. AE Malawi held three training sessions in Zomba ahead of the mission where 85 people were trained. The second phase of training the same group was set for the month of June. In April this year, task team leaders for the Zomba Leadership Mission were successfully appointed and a meeting with Church leaders in Zomba to review mission plans was held.

The AE Zambia team continues to go through the AE Manuals to adequately prepare for both the Kitwe and Lusaka mission scheduled for this year and next year respectively. The AE Zambia team visited Kitwe at the invitation of the Maranatha Pentecostal Assemblies of God church to help with the mobilization of the church for evangelism. Close to about 100 church members turned out for the evangelism outreach in Kalulushi.

In Ghana, the AE team is preparing to have a mission in Lome, Togo from the 15th to the 25th of October. An online meeting with the leaders in Togo was held earlier to aid preparations. The leaders were also able to meet the working committees in person. A HBE online training is scheduled for 30th June.

Preparation is ongoing for AE Ethiopia’s mission scheduled for 22nd – 26th December in Kotebe, North East  of Addis Ababa. Last month, the AE team held a Home Based Evangelism training as part of the preparations steps for the mission.