Greetings from a cold Nairobi!

Allow me to begin with an update on the on-going crisis in South Africa (SA). There have been riots and burning of shopping malls in Kwa Zulu Natal (KZN) and Gauteng provinces, following the jailing of former President Jacob Zuma in relation to corruption cases during his Presidency.

The SA uprising stemmed from the following set of events: The constitutional court, on 29th June, 2021 sentenced the immediate former President, Jacob Zuma, to a 15-month jail term for defying an order to give evidence at an inquiry examining high level corruption during his presidency. It took a week before he turned himself in, on 7th July, albeit the police having been instructed to arrest him and failed to do so. This led to a week of heightened national tensions that ultimately led to the KZN riots.

It is on this basis that I called Theuns Pauw, our AE South Africa Team Leader, adding to the prayer calls going forth for South Africa. From our conversation, he informed me that the residents of Pietermaritzburg (PMB) had to work from home this morning. He mentioned that PMB, being the Provincial headquarters of KZN, has become the centre of the riots, that have seen a number of shopping malls looted and burnt. As a result of this, the SA military has been called upon to ensure peace is restored; and the Constitutional Court has been set to hear an appeal today, 12th July, to rescind the sentence. The outcomes of the hearing at the Constitutional Court could lead to further tensions and riots. Additionally, electrical power failure, more so in PMB, has aggravated the situation, resulting to many shopping places razed, roads blocked and increased insecurity as protesters and criminals have taken advantage of the scenario.

Kindly keep our African Enterprise team and South Africa at large in our prayers. Pray also that the military will act with discretion and that calm will return as soon as possible.

It was a delight to join AEE Kenya accompanied by our international missions director and the international office communications team for their annual Citywide Mission that took place in Mombasa over the past 11 days. I was especially enthused by this mission because we have not been able to conduct missions in our stratified evangelism model since 2020. The Kenya 2 team conducted this mission with keen observance of Covid-19 protocols in order to safeguard the health of the missioners and the audience. Over 800 missioners, both local and visiting, engaged in the Mombasa West Mission.

Some of my highlights roles in the course of the mission entailed encouraging the evangelists in their morning briefs, preaching through radio and joining one of the teams for the one-on-one evangelism,– which was the main mode of delivery, given restrictions on gatherings. In one homestead, we saw 16 young people coming to Christ. About 6 of them had gathered for a fun Saturday morning when we came by. They all listened as we shared the good news and made commitments – only for more to keep coming in from the neighbourhood – and as they came – they found us there ready for them. It seemed like the Lord had laid a dragnet for them! My other highlight was to see believers from one of the local churches, with their Senior Pastor, using the decision cards to make frantic phone calls to the new believers. And what a joy it was to see some of the new believers in the churches on Sunday 11th July. Home based evangelism still remains our approach in view of Covid.

This was also evident in Mombasa where we distributed pre-recorded messages saved in DVDs to individuals to take away and share the gospel with others, these DVD messages can be played over and over again and have the potential reach many.

Let us keep the Mombasa pastors and church members in prayers as they follow-up on the 10,986 people that came to Christ. Let us also pray for the new believers – many of them, given the Covid-19 economic impact, are living in very deplorable conditions, where basic daily food is a major challenge. 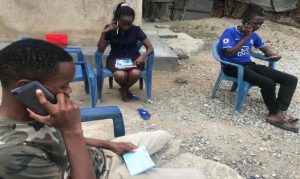 Our next mission will be the Kayonza Mission in Rwanda, that will take place from 15th to 22nd August, 2021.

Africa’s place in Global Christianity Opponents of Christianity declare that it is dead. Despite their untimely celebration, our faith is very much alive. All over the world. In Africa, its pulse beats strong. In a continent that the world may have forgotten, God is...

AEE-Rwanda implements a healing and reconciliation program targeting both students and out of school youth. The program also targets the key community groups that have greater influence on youth. The key ones being parents, teachers, grassroots leaders, and pastors....

Poverty neglect and rural migration have led to around 61,000 children aged under 15 years being forced onto the streets of Ghana’s capital city Accra. Sadly the right to food, health, education and a safe environment are missing for these children and they are open...