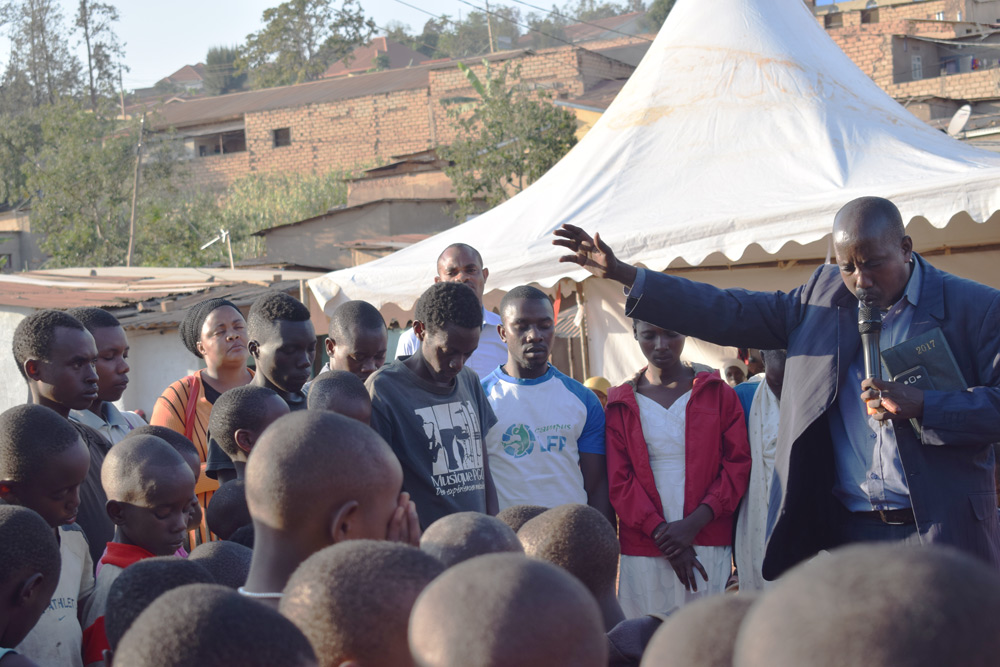 “Train up a child in the way he should go and when he is old, he will not depart from it.”

African Enterprise missions usually aim to reach an entire city with the Gospel during mission week. However, sometimes due to the size of a city, it is nearly impossible to reach the entire population in one week. Not deterred, AE Rwanda developed a plan to reach the entire city of Kigali within three years by reaching the city’s main districts, Gasabo, Kicukiro, and Nyarugene one at a time.

The Gasabo Mission took place in 2016 and reached nearly 79,000 with the gospel 6,900 of them making confessions of faith in Christ.

“The week-long mission brought 10,109 people into the kingdom and proclaimed the Gospel to over 62,987 people!”

This year, Kicukiro was AE’s target and God was faithful!  After over a year of preparation and training of local evangelists, the week-long mission brought 10,109 people into the kingdom and proclaimed the Gospel to over 62,987 people!

During this mission, the AE Rwanda team placed a special priority on children and made a concerted effort to reach as many schools as possible. They also held events in parks and other public places with special programs directed at grabbing the attention of children.

Albert, AE Rwanda’s Mission Director explained, “It’s clear from scripture that children are esteemed by God. However, we find that in society children are often forgotten. They are ignored, rejected, abused or taken advantage of in so many terrible ways. Even the church sometimes misses the mark in giving children the right start in life. Along with reaching the lost, one of our desires during this mission was to rekindle ministry to children in Kigali. We have worked hard to develop an intentional and strategic outreach plan to the children of Kigali and we’ve taught this strategy to our local church partners with the hope they will embrace it and continue the work.”

The AE Team spent the week prior to the mission with local Sunday school teachers training them in how to effectively minister to children. The team also taught the children themselves how to effectively share the Gospel with their friends.

As the mission began on June 17th, the children and teachers gathered at a local playground where they performed the skits, games, and songs they had learned in order to attract a crowd. They then shared the Good News with the people who had gathered and 103 of the village children accepted Christ! Praise God! 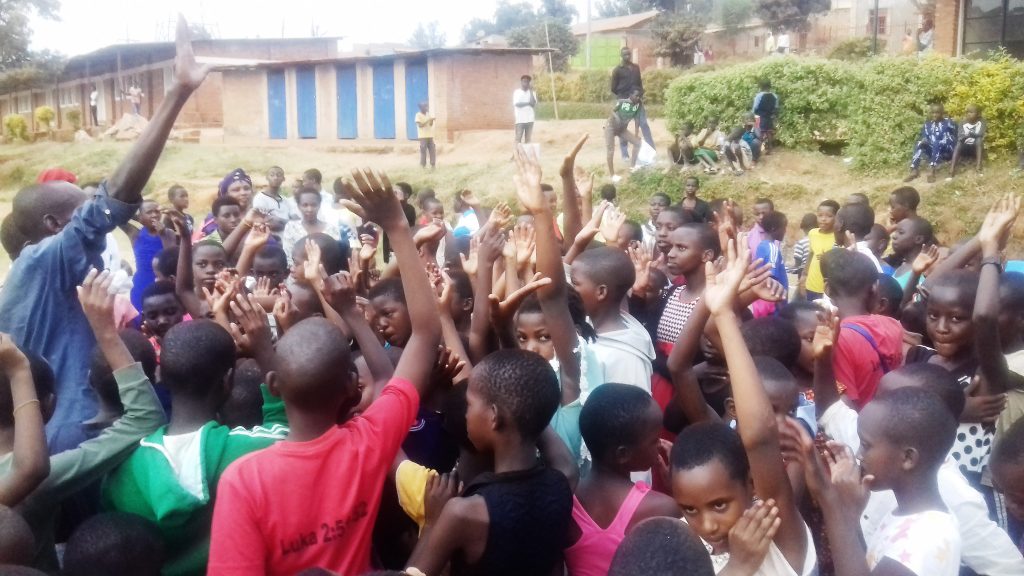 In one school, the team met Martin, a self-described hooligan. “I’ve always been proud of being wild; being feared by the other students,” Martin told us. “I’ve never before felt remorse for my actions. That is until the AE missions team arrived at my school.”
In a school of 310 students, Martin was renown for his wild ways. “When the mission team came this morning, I wasn’t too interested, but when they began speaking about the Gospel and the love that Jesus has for me, I was immediately convicted of my sins and I knew that I needed Jesus in my life.”

“Martins humble response to the Gospel touched the hearts of many other students who then also felt emboldened to raise their hands to receive salvation.”

As the AE team called for people to raise their hands to accept Christ Martin was among the first to respond. Upon seeing his hand in the air, a gasp went up among the other students because they couldn’t believe that the boy they had feared was responding to a call for salvation! Martins humble response to the Gospel touched the hearts of many other students who then also felt emboldened to raise their hands to receive salvation. In total, 300 of 310 students responded to the call for salvation at Martin’s school! 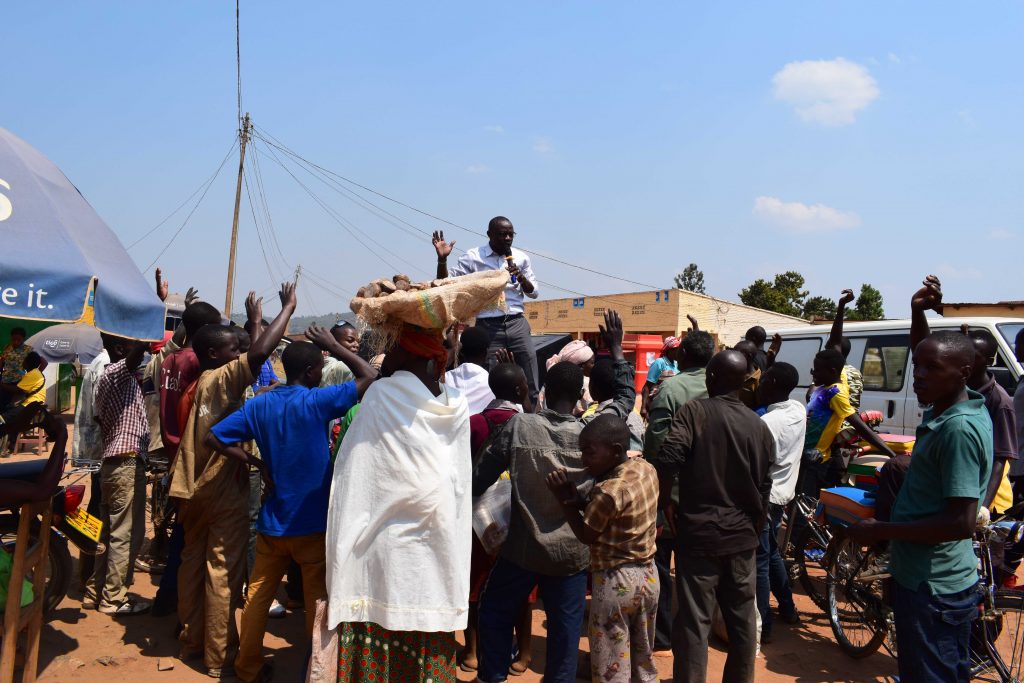 Throughout the Kicukiro Mission Week, people heard the Gospel ringing through neighborhoods, marketplaces and, slums. Open air outreach in these places brought many to their knees in the knowledge that they needed Christ in their lives.

“My life is in disarray.” Jeannine (19) told the team. “When I lost my both my parents at a young age, I was left feeling alone in the world. I thought that relationships with men would help me be fulfilled. So, for several years, I’ve thrown myself into multiple relationships and affairs but instead of finding the affection and care that I wanted, I’ve only found frustration, dismay, and pain.”

“As I was walking through the market, I heard someone preaching the Gospel through a speaker and their words struck me to the heart. I was compelled to stop and listen and I made a decision to follow Christ right then!”

“As I was walking through the market, I heard someone preaching the Gospel through a speaker and their words struck me to the heart. I was compelled to stop and listen and I made a decision to follow Christ right then! I felt instantly free and light! I want my life to be transformed by God. I am determined to follow Christ and lead a life that honors him. Thank you for coming to tell me about Jesus today.”

These are just a few stories from the many thousands of lives that have been changed by the Gospel through the Kicukiro Mission. Now the church must continue the work by reaching out to those who have made confessions of faith and starting them on the long road of discipleship. Please pray for the local Kicukiro churches as they begin this very big task.

Please also pray as the team begins preparation for the Nyarugene Mission. Ask God to provide church partners who are passionate about reaching their communities with the Gospel.

You can support the Nyarugene mission one of the many other missions that happen throughout the year praying and giving. Download our prayer diary and give today so that you can partner with us in bringing thousands into the Kingdom of God every year!

Reminiscing on Billy Graham’s landmark crusade in apartheid South Africa “The South African Congress on Mission and Evangelism in Durban in March 1973 was, I believe, a turning point both in our own ministry and for South Africa.” – Michael Cassidy When AE invited Dr....

Life in the Korogocho Slums

My name is Elizabeth Wanjiku, I am a single parent of 5 children and a grandmother of 13 children. I live in Korogocho slums in Nairobi where I have lived for over 20 years now. I raised all my children here in Korogocho but unfortunately 3 of them got sick and passed...

Ugali - Kenya Servings: 3-4 Ingredients: 4 cups water 3 cups full of maize, millet, or sorghum flour (can be mixed with cassava flour). Preparation: Bring the water to a boil in a large pot, and then pour in some of the maize flour. Allow the water to keep boiling for...