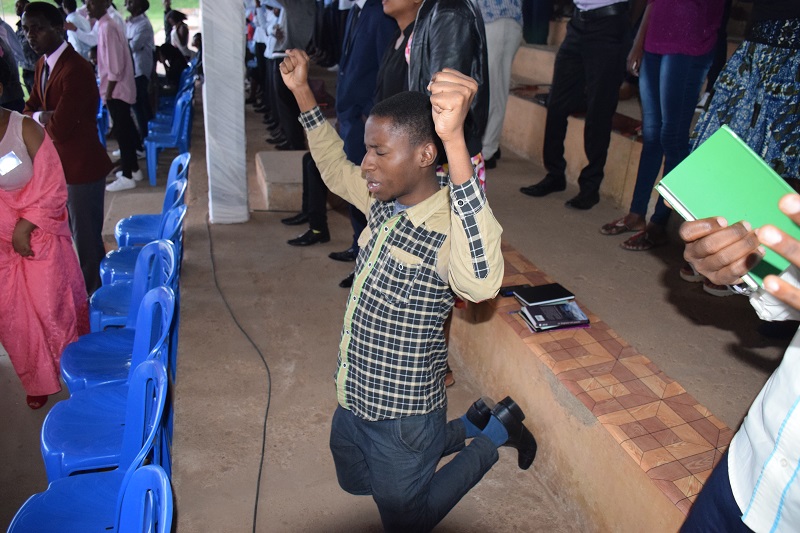 It is with thankfulness to God that we bring you news of the Huye City Mission in Rwanda in May. As usual God’s favour was seen throughout the mission. In preparation for this mission, African Enterprise locked arms with local churches across 19 denominations training and discipling leaders and pastors in evangelism. It was amazing to see these the local church come together for a common purpose: to see the lost come to Jesus.

Evangelistic activities took place during the eight-day mission in schools, universities, marketplaces, streets, prisons and churches. Over 50,000 people heard the Good News of Jesus and 19,371 made a decision to follow Christ! We praise God for every heart that was changed! Pray that they may continue on in Christ until they meet Him face to face.

During mission Evangelist Albert Mabasi, AE Rwanda Mission Director went to Karuanda prison, home to many accused of engaging in the genocide against the Tutsi’s in 1994. He had gone to follow up with some inmates who had responded to the Gospel earlier in the mission week. Being a genocide survivor, he was in disbelief as he found himself standing in front of the genocide perpetrators.

Albert said; “I am a genocide survivor, and for sure it is my first time going in there. For me looking at people dressed in jumpsuits frustrates me, because, I immediately think of my family that I lost during the genocide against the Tutsi’s in 1994. I was so scared standing in front of them, imagining if they all wanted to tear me to pieces! But within that scary mood, I felt that compassion that Jesus had when he saw weary people, and the Holy Spirit told me to love them like Jesus. I took a breath and felt the spirit of love in me towards them, because they also needed the Gospel to set them free even though they were enclosed in prison. I thought of the scripture found in Matthew 9:36: ‘but when he saw the multitudes, he was moved with compassion on them, because they fainted, and were scattered abroad, as sheep having no shepherd’. Therefore, I started preaching to them freely with much compassion but surely it was not easy.”

One of the challenges African Enterprise encountered were Rwanda’s strict laws on noise pollution established in 2017, causing many churches and businesses to abide by strict guidelines, building codes and limiting outdoor services or public religious activities. This threatened the plans for mission week as most of the evangelistic activities take place in outdoor, public spaces so that everyone around will be exposed the Gospel. Amazingly, God opened up opportunities for African Enterprise to work with the local government and hold open air services as well as hundreds of outdoor mission activities throughout mission week!

Cecilia Nyirankundimana is a 42 years old mother of six children. She was walking down the street during mission week and saw many gathered together. Curiously, she moved in to see what the commotion was about. She heard the words of the mission team as they spoke about the power of God to deliver from all manner of bondages. Cecilia was convicted about her numerous visits to witchdoctors which had brought nothing but emptiness and regrets. The peace and reassurance she sought still remained elusive. God captured her heart as she continued to listen to the preaching on the street. “I knew I was walking in sin and great disobedience, but could only think about God in terms of his pending punishment for my sins, not in terms of his offer of forgiveness and relief. Now I have given my life to Jesus. I have decided to try this as you said and to experience the power of God you have talked about.”

We thank God for the thousands of lives that were changed with the Gospel in the Huye district of Rwanda and that He allows us as His humble servants to partake in His work! He also showed us that He doesn’t just work in the hearts of the lost, but like in Albert’s case, works in the hearts of those ministering as well. We are praying now for the preservation part of the mission, that each person who received Christ will be followed up with and be placed in a church and nurtured in their relationship with the Lord.

Find out more about our missions

Santino Yuot, a former refugee and leader in the South Sudanese community in Australia, has a passion for the gospel in his home country which has been enhanced by studies at Sydney Missionary and Bible College. AE provided funding towards Santino’s trip to his...

COVID-19 pandemic has affected majority of countries in Africa. Confirmed cases of COVID-19 in Africa were 189,559 as of 8 June up from 51,000 a month ago. The numbers are growing fast. A new report by the Partnership for Evidence Based Response to COVID-19 (PERC)...

Training, and being trained by, African Christian leaders

Ministry in Africa really was a two-way street! From 2003–14 I had the privilege of helping to run a PTC in South East Africa Program – a joint initiative between African Enterprise and the Moore College External Studies Department (as it was then known). The aim was...