Kenya is a large East African nation that borders the Indian Ocean. It is a nation of great extremes, with beautiful lakes that form part of the African Great Lakes region, large peaks such as Mt Kenya, glaciers, the extensive Great Rift Valley, and coastal regions. Kenya is bordered by five countries: Ethiopia, Somalia, South Sudan, Tanzania and Uganda. Nairobi is the largest and capital city with a population of nearly four million people. It is located towards the south of Kenya and is the site of the African Enterprise Kenya Field Office. Endowed with land and mineral wealth, as well as unique wildlife, Kenya has a thriving tourism industry, especially in coastal towns like Malindi. However it faces significant national issues such as an ongoing water crisis, desertification and poaching that threaten its relative political and economic stability. Further, despite a majority Christian population the Islamic population is increasing, especially in the coastal east and north. Kenya also faces a rising refugee influx from bordering South Sudan and Somalia and HIV/AIDS continues to be an ongoing issue.

Benson was appointed in mid 2017 as the new Team Leader for AE Kenya. He is married to Janet, and they have two young children, Anita and Emmanuel. Benson is passionate about bringing people to Christ. AE Kenya is excited about Benson’s leadership over the Kenya team, with his strong background in administration and missions. 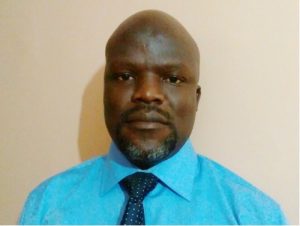 Korogocho is an extensive slum neighbourhood found on the outskirts of Nairobi. It is estimated to have a population of over 200,000, in a tiny 1.5km2. Korogocho is likely the fourth largest slum in the city. African Enterprise has been working in Korogocho to alleviate diseases that come from poor sanitation for over 10 years. The project targets the poorest households in the slum, educating and training residents about the importance of good sanitation and hygiene practices, building pit latrines and hand washing stations. This project has been instrumental in restoring dignity and safety to many residents in the slum, protecting children’s and women’s rights and showing the love of God to slum residents through the work of AE.

Since 1995, African Enterprise Kenya has been working to empower former commercial sex workers, unskilled and vulnerable single mothers, and women living with HIV/AIDS in Nairobi’s Korogocho, Kariobangi, and Mathare Slums. Each year, the aim is to retrain 90 women with practical skills to help them escape the poverty cycle. Mathare also offers support and counselling to those women who have suffered trauma in the past. Over a period of a year, women are trained in courses such as dressmaking and design, soap production, entrepreneurship and bead work. They are also taught business and entrepreneurial skills, so that at the conclusion of the program they are ready to apply for loans for start-ups, establish new businesses and look after their families.

Kayole is one of many slums located on the outskirts of Nairobi, Kenya’s capital. With an estimated population of 700,000, most of its residents live in abject poverty in homes that lack electricity and running water. In addition, more than 60% of the population are unemployed with most families living on less than one dollar a day. Soweto Kayole Clinic was established by African Enterprise, Kenya in 1996 as a community health centre with the aim of providing affordable health services to the residents of Soweto Kayole and the larger Embakasi District. This not-for-profit clinic is a beacon of hope for many who cannot afford to access quality medical care and are often forced to turn to ill-equipped unlicensed medical facilities. God has blessed the project with an ambulance that is now serving the community whenever there is an emergency. The ambulance crew is fully trained for first aid and emergency rescue and has so far responded to many medical emergencies.

Youth are the future of Africa, and it is essential that effective youth discipleship and empowerment programs are part of our mission strategy. The Foxfire Team is the youth arm of African Enterprise’s evangelistic and mission activities. Teams are made up of young people, with a passion for evangelism, who give a year of their lives to the service of the Kingdom. The year begins with two months of intensive training before they are released into ministry. Foxfires then visit schools, youth groups, churches, children’s homes and colleges in and around the cities in which they are based. Using energetic and exciting dance and drama programs to attract and connect with the youth, the Foxfires bring the Gospel message to young people and are able to speak to them as one young person to another.